We often think, very unfairly, of Indian food as rich often oily gloopy curries and no further., afterall that is what a lot of us Brits have experienced. Travelling through India over the years, and now with fabulous new Indian restaurants opening up, and some great food writers and chefs around, shows us that Indian food is much more than a Chicken Tikka Masala.

Paneer, Indian cheese, doesn’t have a strong flavour, it relies on the cook to add flavours to it. I’ve yet to find a worthy substitute for paneer, but it’s now widely available, you’ll find it in major supermarkets and of course Indian groceries. Fresh paneer is stunning, but lets face it, not many of us have the time, energy or patience to start from scratch, so I’ll stick to the shop bought paneer for this recipe.

Most versions of Sag Paneer have cream added towards the end of cooking which makes it a very rich creamy dish. I’ve left the cream out as I prefer the fresh taste of the spinach and spices to stand out. It also makes it a lighter dish and frankly not quite so calorific! I also don’t blend the spinach, if you are lucky enough to be using great fresh spinach, why ruin it by blending it to a paste?

If you have never made fresh garam masala, now is your chance! Garam Masala roughly means a “warm or hot mix”. To me, it is a wonderful heady pungent blend of spices.The garam masala is added at the end of the cooking process, and isn’t really cooked into the dish. Consider it as a final seasoning for the spinach and paneer.

Sag Paneer is usually served as a side dish, but I’m happy to make it the centre of attention. Serve it with whatever you like – a dal and rice or stuff the mixture into a pita or flatbread along with some pickle. 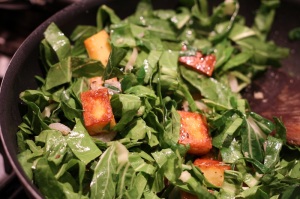 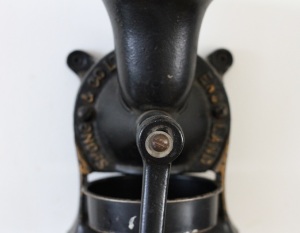 Any excess garam masala can be stored in a jar for at least a month. 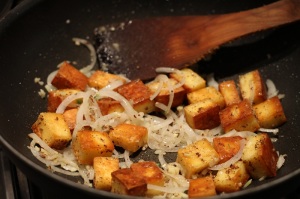 I’ve previously made this dish with Chard or any other greens that I have growing. The spinach is coming into it’s own at the moment, and now we’ve had some rain I’m expecting a great crop throughout the winter and into early spring. I like to pick the leaves young, and tender.